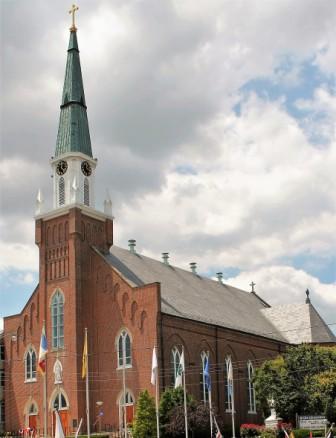 The current, brick Ste. Genevieve Catholic Church is the third Catholic church erected on this block. As Ste. Genevieve was moved to higher ground due to flooding, the original log church was moved here in 1794. A stone structure

replacing the log building was consecrated in 1837. As the congregation grew a larger church was required, and a brick building was constructed around the stone one. The stone church continued to be used until the new church was completed in 1880. Then the remaining old stones were removed out the doors. In 1911 this church was expanded again with the addition of the altar apse and the two side transepts. Come inside to admire the stain glass windows and marble adornments!