Ste. Genevieve is located on the west bank of the Mississippi River approximately 60 miles (97 km) south of St. Louis. Ste. Genevieve is the principal town and the county seat of Ste. Genevieve County with a population of around 5,000 people. Ste. Genevieve was the first permanent civilized settlement in Missouri. The actual date of establishment is, like many other dates, connected to genealogy. There is a conflict of opinion as to the exact year depending on the preferred source. The year 1735, according to Goodspeed’s History of Southeast Missouri, and most of the descendants of the early settlers, is the most generally accepted date. Dr. Carl J. Ekberg, in his book, Colonial Ste. Genevieve, is of the opinion the date of the establishment of Ste. Genevieve is closer to 1750, based on interpretations of early letters, maps, and Catholic Church documents.

The village of Ste. Genevieve was originally included in the Illinois Country. This was generally accepted to be all the land claimed by the French from the mouth of the Ohio River, north to the Great Lakes, and including the valleys of the Mississippi, Missouri, and Ohio Rivers. The seat of government was established in New Orleans, and what is now Missouri became part of Upper Louisiana Territory. The early French explorers and settlers were known to have been in the Ste. Genevieve area in the very early 1700s.

Salt was a very important commodity then in the preservation of foods and curing of animal hides, and the early French settlers were quick to exploit the salt springs on Saline Creek just below Ste. Genevieve. Mineral explorations lead Renault and La Motte to the area, and some of the very earliest lead mines were named for La Motte in nearby Madison County. 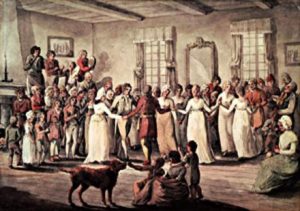 The present site of the town of Ste. Genevieve was moved to a higher elevation from the river bottoms after the devastating floods of 1785. According to a sworn statement by one Julien Labriere, in October 1825, “there were about fifty or sixty cabins in the old village. The old village was overflowed so as to be on the tops of houses. The water in many places was twelve or fifteen feet deep.” Although the Mississippi River was a natural barrier, travel back and forth was frequent and common. The first commercial ferry at Ste. Genevieve was established about 1800. When Missouri was first being settled, the Osage Native Americans were the only tribe between the Osage River and the Mississippi. They were of the same stock as the Sioux and hostile to the whites. Around 1787, the Spanish government, who had acquired the territory from France in 1762, brought in a band of Shawnee and Delaware Native Americans, who had been friendly to the French, to help protect the settlers from the Osage. After the French had established and settled Ste. Genevieve, the first American settlers started showing up in about 1788, and trickled upriver from Cape Girardeau and New Madrid. Starting about 1794, Americans began migrating into the Ste. Genevieve District from Pennsylvania, Virginia, Kentucky, and Tennessee. Starting around 1840, German Catholics began settling around New Offenburg and Zell, and shortly after German Lutherans began spreading into Ste. Genevieve from Perry County.

In 1800, France re-acquired Louisiana from Spain, and in 1803, Napoleon Bonaparte I sold it to the United States as the Louisiana Purchase. U.S. officials took over in 1804 and a much larger Ste. Genevieve District that included portions of Washington County, St. Francois County, Jefferson County and Perry County was formed in 1812 as an original county. It is now bordered on the east by the Mississippi River, on the north by Jefferson County, on the west by St. Francois County, and on the south by Perry County.

The above image depicting an early scene of Ste. Genevieve in its original location on the banks of the Mississippi River, was cropped from a mural painted in 1924 and is located in the Missouri State Capitol building in Jefferson City, MO. Artist: Oscar E. Berninghaus (1874 – 1952).